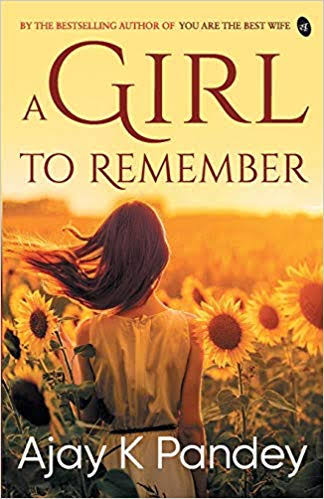 It takes courage to write something outside the box and even more so to make the message stick to the story. A girl to remember, by Ajay K Pandey, is one such book. Ajay K Pandey has made his protagonist, Neel Kumar, a person whose body controls him more than his mind or heart does. Neel is described, even by himself, as a demon who thinks women are nothing but soft toys with no emotions, which he can use and throw away as his body wishes.

The main characters are Neel, a Mathematics teacher in DAV school, Pihu, a student in the school, and Annu, her mother. The start of the book depicts Neel’s removal from the school accommodations on the accusation of ‘inappropriate behavior’ and breaking a school’s rule. Now roofless Neel is offered a place in Pihu’s house, where he is introduced to her attractive mother, Annu. The story then unfolds naturally, the story developing sufficiently well.

You know the author has done a great job in portraying Neel when you start hating him from the first word. Yet, as the story progresses, you are assured of the humanness that still exists within him, which comes out when Pihu has almost become a sweet, aching memory from the past. The transformation of Neel from a self-proclaimed demon to the angel Pihu thought him to be is heart-warming. While it depicts that any kind of person can have such carnal, disturbing thoughts like him, the book is also quick to show that such a person can transform to the core, if loved and helped by someone selflessly.

Not many readers could keep up with fast-paced books with heavy words. This book, therefore, acts as a savior for the readers. The narrative style is simple yet effective, keeping the readers riveted by the plot. Though the story is written in the first-person narrative, some of the chapters are written by other characters, such as Aarav, Annu, and Neel’s mother. This little peek in others’ minds provides freshness to the story. The narrator’s inner thoughts, as well as his outer appearance, are conveyed perfectly, making the story quite realistic, enough for you to believe it can happen around you.

Pihu, who is obsessed with Neel, is the ‘girl to remember’. She is seized by a deadly disease, but the information is hidden from us so that the mysterious behavior of Annu and Pihu will make us think. The way she and her health problem are portrayed is quite commendable and yet, her presence doesn’t feel that important, in spite of her evident essentiality to the plot. However, without her, the confession at the end wouldn’t have taken place and give a much-believable turn to Neel and Annu’s relationship.

I felt that the book ended too soon. The mystery surrounding Pihu and Annu, Neel’s transformation – all feels kind of rushed, which didn’t let the mystery settle around and build up properly. If the author had given more thought to other’s backstories, the story would have come out even more nicely. It is hinted that Neel can very easily become a sexual abuser if he kept giving in to his body’s wishes. This view is later reinforced in the chapter ‘Neel’s mother talks’, where she says, “Every time I heard of molestation cases, I would get scared. I prayed to the almighty to give Neel the wisdom to refrain.”, which I found disturbing but equally eye-opening.

Nevertheless, ‘A Girl to Remember’ is definitely a one-time read, a book that can easily be completed during a quiet afternoon or while traveling.