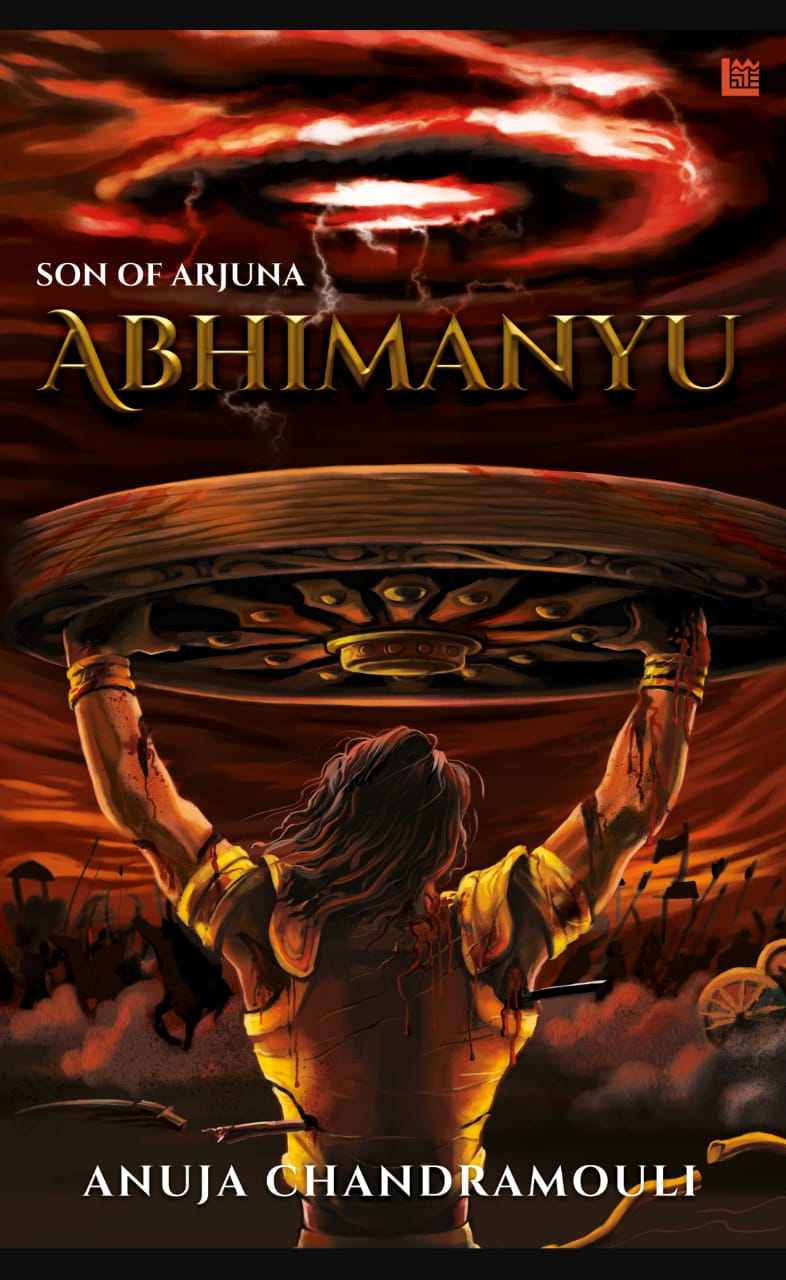 ABHIMANYU, the beloved son of Arjuna is one of the most endearing figures of Indian mythology. The Golden Prince, blazed across the realm of myth like an effervescent comet that lit up the heavens, yet was extinguished far too soon.

Anuja Chandramouli, bestselling author of Arjuna, takes apart a familiar narrative and puts it back together with originality and flair, delivering a profoundly moving take on a classic text. Narrated with deep intensity, Abhimanyu’s saga unfolds, shedding light on unexplored aspects of his remarkable life and extraordinary persona. Booked4Books in association with the author brings an exclusive chapter from the book to help the understand the narrative and the context… read on

Nakula had returned with ten thousand camels laden with the valuables he had received on behalf of his brother, Yudhishtra, having successfully subjugated the provinces to the West. He told Abhimanyu all about his adventures and narrated in detail how he had subdued the Rohitakas, Sivis, the fierce Mattamyurakas, Amvashtas and Malavas amongst others. They were in the stables which was Nakula’s favourite place in the entire Kingdom, feeding the fine stallions and mares stalks of fresh fodder and their favourite grain cakes. He addressed them all by names and they responded to his attention with affection, nuzzling their face against his.

Abhimanyu loved the horses too and had a special understanding of all animals and birds, like his mother. They loved him too. He loved the feel of the velvet muzzle of the beautiful mare, in his palm as he fed her and the affectionate way she responded when he put an arm around her and laid his cheek against her. He stayed that way as his Uncle Nakula carried on talking breathing the strange but sweet scent unique to horses.

‘The best part of it all was my sojourn in my maternal Uncle Shalya’s Kingdom, Madra!’ Nakula’s handsome face was suffused with an unearthly joy.

‘Was it very beautiful uncle?’ Abhimanyu, looked up, somehow sensing the secret sorrow in Nakula’s heart, ‘tell me all about it!’

‘It was a lovely place…’ he said softly speaking almost to himself, lost in his memories of one he had loved and lost, ‘my mother’s Kingdom is a land famed for the beauty of its people. But they told me there is none among them who is as good looking as my mother had been. When the grandsire, visited Madra to ask my Uncle for the hand of his sister, on behalf of my father Pandu, he parted with a fortune, which was the bride price all suitors seeking to marry the fabled beauties of Madra had to pay.’

‘You seem to have inherited your mother’s good looks Uncle Nakula, everybody says you are the handsomest Pandava brother!’

He smiled in response to his nephew’s effort to make him feel better, ‘Uncle Shalya had preserved her old rooms just the way she left it. All her cherished possessions had been safeguarded. Every inch of her room was covered in beautiful paintings she had done with her own hands. There were so many… I remember her nimble fingers. My father had gifted her a jewelled comb and she always had it tucked away on her person. She would massage my scalp in the evenings and comb out my hair. It used to be my favourite part of the day. I would lie down in her lap after that and listen to her talk of Madra.’

His voice trailed off as he remembered how her lap had been the softest of pillows and those gentle fingers which had been so soothing. How he missed her and what he wouldn’t give to lie down on her lap again!

Nakula’s voice was thick with longing when he spoke about the parts of his mother’s life he had become acquainted with in distant Madra, ‘Uncle Shalya even had a lock of her lustrous hair and the first tooth of her’s that had fallen out carefully set in gold and enamel. He let me have both as a gift and asked me to show them to Sahadeva as well… Uncle told me she cried when he told her that all her teeth would fall out and she would look like an Ogress. His father, the King paddled him for making his sister cry but he told me he had only meant to tease her and not make her cry. They had her favourite dolls and the dresses she wore as a child, as well as her combs, handheld mirrors, bangles, chains and anklets.

‘An old nursemaid showed me the swing she played on in her favourite bower and the silver stream she used to take a dip in.’

‘Did you sit on her favourite swing and swim in that silver stream Uncle Nakula?’

Nakula nodded wordlessly. He had felt a little silly doing it but he had wanted to walk in her footsteps and experience a little of her precious childhood. No matter what he did, he could never bring her back. Nakula knew that. He had tried often enough, calling out to her from the empty spaces she had left inside him, searching for her endlessly. But he also knew that he would never stop trying. Not until he had joined her on the other side. Until then, he clutched the memories he had of her in place of her hug which he remembered so well and would never experience again in this life.

Abhimanyu sat with him in companionable silence sharing in his grief and memories. Nakula wondered how he could talk about his mother with this little boy when he could not bring himself to do so with anybody else. Not even Saha… But then again, Nakula had been Madri’s favourite and Sahadeva had always been Kunti’s. And his twin was not particularly demonstrative when it came to his feelings.

‘She was a gentle soul, you know. The dense forests held many terrors for her, but she braved it all because she loved my father and was determined to share his fate. And I can still hear her voice on beautiful Spring days, when the flowers were blooming. Saha and I would try to gather all the blooms we could in our little palms to take to our father to string little garlands to adorn mother’s hair with… It would make her so happy!

‘She loved wild honey. Bhima and my father would always get some for her, fresh from the comb and she would be delirious with joy. And you should have heard her sing Abhi… She had a voice which even Tumburu, that famed Gandharva singer would have given an arm and leg for! I can still hear her sometimes in my dreams. And she sounds the way she used to when she wanted to comfort my father… He made the best of a bad situation but sometimes he would be sad. And mother Kunti would ask us all to gather around him and request my mother to sing. Even the deer, rabbits and the elephants would come to be soothed by that divine voice.’

He sang one of the ditties she used to sing for him on warm summer nights when they had slept under the stars. Nakula always cuddled up next to her loving how soft and fragrant she was. Even the horses stopped whinnying when they heard him sing and Nakula sang on and on hearing that beloved voice crooning in his ear, like she had never been away.

Try as he might, Nakula could not dam the flood of memories and emotions that welled up from deep within. When she made the decision on that accursed day to enter her father’s funeral pyre he had run with all his might, to try and stop her. She had raised her hand to stop him and placed her hand over her heart before she surrendered to the flames. Nakula would have gone to her, but Bhima had held him in a bear’s grip. He struggled against that unbreakable embrace but stopped when he realized that his mighty brother was bawling like a baby, and great sobs were wracking his body. Arjuna had gently freed him from Bhima’s suffocating embrace and stood quietly by his side. The tears were running down his face too. He had seen Yudhishtra and Kunti holding onto his twin who was still as a statue, his eyes downcast.

Nakula had watched as the greedy flames took his mother from him and the sight was seared into his memories and continued to torment him. ‘It is a barbaric custom Abhimanyu,’ his voice was choked with pain. ‘She made her choice and I had no choice but to respect her wishes but a wife must not follow her husband in death. Not when she still has her own life and children. I still hate myself for not disobeying her command and rescuing her from those flames.’

Nakula was crying again. The way he had on that fell day that had marked the end of his childhood. He hadn’t cried like that in a long time. Abhimanyu leaned quietly against his shoulder and he was crying too. ‘I feel like I have gotten to know my grandmother a little better Uncle Nakula. Thank you for telling me about her.’

His Uncle smiled through the tears moved by the kindness and compassion in that voice which had not yet lost its childish treble, ‘My mother was special and I wish she had lived long enough to see you and my Satanika. It is certain that you would have been her favourite.’