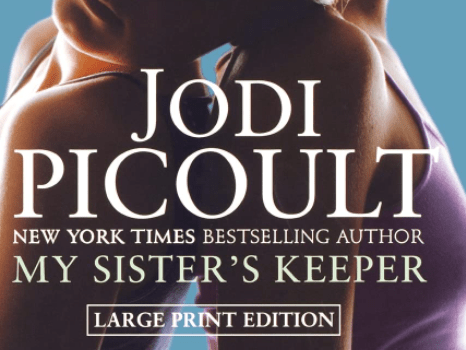 All readers wish to see in novels is triumphant love, successful careers and a happy ending. It’s not an outlandish wish per se, because the reality more than makes up for the angst and sadness and every other negative emotion you can think of right now. Heaps of books showcase happy endings – if not all – and all are happy to get lost in the different worlds.

In case, however, you want a reality check, there are authors out there who revel in giving their stories a sad ending (i.e. making their readers suffer). The Fault in Our Stars, Wuthering Heights, Looking for Alaska… the list goes on. If you’re looking for something like that, these book recommendations might come in handy!

In Jodi Picoult’s My Sister’s Keeper, Anna Fitzgerald is a saviour sister to Kate, who suffers from blood and bone marrow cancer. Anna is invisible in her own family, donating anything she could to save her sister – but she doesn’t get any better. It’s only when she’s asked to donate her kidney – which Kate doesn’t want but her parents are forcing them both to do that – that Anna decides to take her parents to court for medical emancipation.

She wins the case but still decides to give her kidney to her sister. Unfortunately, Anna gets in a car accident – and all her organs go in saving Kate’s life. Fast-forward to a few years, her family is living comfortably… while she becomes permanently invisible now. Even writing about this is making me tear up!

Nicholas Sparks just knows how to hit right in the feels! A walk to Remember is a classic romantic tale, where one of the main characters is dying. 17-year-old Landon befriends the ugly, bible-carrying girl, Jamie rather reluctantly. However, after spending a lot of time together, he realizes he’s falling for her. Imagine Landon’s surprise when he finds out Jamie is dying – Bada Bing! Add that angst. Instead of crying his heart out though, Landon makes sure Jamie’s only wish gets fulfilled. We see him still wearing his wedding ring, even at the age of 57.

Is the ending truly sad? Depends on how you perceive it. Would it still make you cry? Hell yes!

Any novels centering on animals (read: dogs) will one hundred per cent make you cry at some point! Daniel Keyes’ Flowers for Algernon is filled with complex themes and symbolic messages and we find a mouse here, instead of a dog! Charlie Gordon – with an IQ of 68 – is selected for an experiment that’ll increase his mental performance. It’s somewhat believable, they assure him because it’s been tested on a mouse, Algernon. It is successful and Charlie’s life transforms overnight.

However, just when it seems everything is just fine, Charlie’s life goes downhill. And in all this mess, Algernon dies (cue sad music). It’s apparent that Charlie would also meet the same fate – and that he does, by the end of the book. The only thing he requests before his death was to put flowers on Algernon’s grave. I am pretty sure this is what a real tearjerker means!

You know you’ll feel at least sad if the story has World War II and gas chambers as its backdrop. John Boyne’s The Boy in The Striped Pyjamas follows the life of little Bruno, who shifts to Auschwitz due to his father getting promoted to the post of the death camp’s Commandant. Bruno curiously explores the wire fence around the camp and meets Shmuel, a Jewish boy, becoming friends with him. Shmuel wants to find his father – who’s somewhere in the camp – and one day, Bruno decides to help him. He sneaks into the camp – shedding his normal clothes outside and donning the prison clothes – only for the two boys to be captured and led into a gas chamber. You probably can imagine what happens next…

When you read John Steinbeck’s Of Mice and Men, the only word you can think of is heartbreaking. Lennie and George, his protective best friend, form an unlikely family – one is impossibly strong but mentally handicapped while the other is illiterate but smart. These two field workers migrate to a farm where they face difficulties but still make it through somewhat. However, when Lennie accidentally kills a puppy – and a whole woman – a lynch mob and police are sent to kill him. George realizes what would happen if the mob gets to his friend first and shoots Lennie himself. The ending just makes you want to curl up on your bed and sob.

Who is not familiar with Huxley’s Brave New World? A book about a fictional futuristic society with an unproblematic, happy façade hiding how unfair and depression-prone it really is? It’s bound to be sad! In a nutshell, we see a man belonging to the Savage Reservation (which is just how the humans live now. Savage, pfft!) wishing to visit the World State, the Brave New World everyone keeps talking about. This man, John, does get to visit… only to see the place is horrendous and he was better off living away from it. It overwhelms him – not in a good way – and by the end, he kills himself. On another note, if this is foreshadowing for our future reality… I hate it!

It’s almost common knowledge that the trauma in any rich household is buried in their closets, instead of skeletons. Instead of talking about it, it gets pushed under the rug so that the perfect image is maintained. The repercussions of doing so, however, are deadly. That’s exactly what we see in E. Lockhart’s We Were Liars.

Little Cadence, the eldest grandchild of a wealthy patriarch, is aware her family is high key toxic, constantly fighting over the inheritance. Her solution? Burning the whole estate – that is the main cause of the problems – with the help of her cousins. All of her cousins died in that fire and she literally doesn’t remember at all. The book ends with Cadence finally remembering her absolutely unpardonable actions. It literally can’t get any sadder than this!

Unhappiness is such a constant presence in our lives that reading books with happy endings makes everything bearable. However, once in a while, readers do love to read books that’ll reflect life the way it really is, no sugarcoating. And that’s where these books come in! Not only would these make you shed a few tears but will also give you a different and interesting facet to your thought processes.