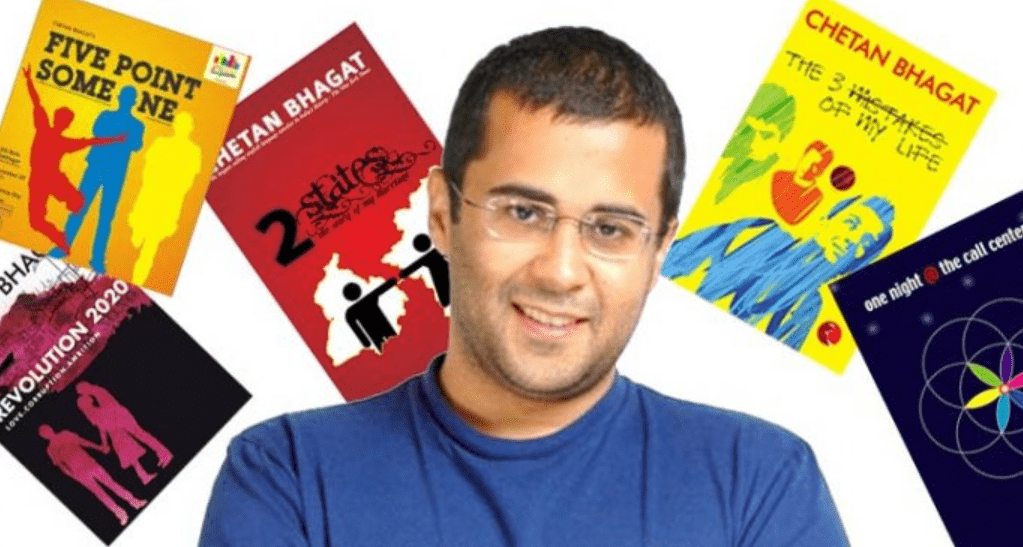 Chetan Bhagat, known as a people’s author, is India’s most widely read author. He began his career at IIM and went on to become a light-hearted and accessible novelist. His works are not only enjoyable for readers, but they also serve as an inspiration for aspiring authors.

In 2008, the New York Times dubbed Chetan Bhagat “India’s Best Selling English Language Novelist.” He was named one of Time magazine’s “100 Most Influential People in the World” in 2010. He is listed among the ‘100 Most Creative People In Business’ by Fast Company in the United States. Continue reading to learn about our top picks for the best Chetan Bhagat books.

“This is not a book to educate you how to get into IIT or even how to live in college,” the book begins. It encapsulates how messed up things can become if you don’t think clearly.”

Alok, Hari, and Ryan, three hostel mates, have a terrible start at IIT when they fail the first class quiz. And, despite their best efforts, things are just getting worse. It takes them a bit to comprehend that tampering with the IIT system results in double tampering. They’ll be at the bottom of IIT society before they realize it. They have a GPA of around five out of 10 and are at the bottom of their class. This GPA is a permanent tattoo that will obstruct everything else that matters to them — their friendship, their future, and their love lives. While the rest of the world expects IITians to rule the world, these guys are just scraping by.

Govind, a young lad from Ahmedabad, dreamed of owning a business in the late 2000s. They open a cricket shop to accommodate his buddies Ish and Omi’s enthusiasm. Govind is ambitious and wants to make a lot of money. Ish is all about bringing up Ali, a batsman with a special talent. Omi is well aware of his limitations and wishes to spend time with his buddies. In a tumultuous metropolis, though, nothing is easy. To achieve their objectives, they will have to confront everything – religious politics, earthquakes, riots, unacceptable romantic love, and, most importantly, their faults. Will they be able to make it? Is it possible for a person’s dreams to triumph over the realities of life? Will we be able to succeed despite a few missteps?

Around the world, love weddings are straightforward: a boy falls in love with a girl. The girl adores the boy. They tie the knot. There are a couple of extra steps in India: Boy is smitten by Girl. The girl is smitten with Boy. The girl’s family must adore the lad. The boy’s family must adore the girl. Boy’s Family must be adored by Girl’s Family. The boy’s family must be adored by the girl’s family. Girl and Boy are still in love. They tie the knot. Welcome to Krish and Ananya’s story, 2 States. They are from two different Indian states, they are completely in love, and they want to marry.

Of course, their parents are not on board. The pair faces a difficult battle to turn their love story into a love marriage. Because it is simple to fight and resist, but far more difficult to persuade. Will they be able to make it?

Why do our students commit suicide regularly five-starchy does India have such a high level of corruption?

Isn’t it possible for our political parties to work together?

Is it true that our vote has any impact?

Although we adore our homeland, shouldn’t some things be different?

We’ve all wondered about these things at one point or another. In What Young India Wants, Chetan Bhagat, India’s most popular writer, expresses himself in his debut non-fiction book.

In What Young India Wants, Chetan Bhagat, India’s most popular writer, expresses himself in his debut non-fiction book.

Chetan Bhagat’s wide experience as a successful writer and motivational speaker informs What Young India Wants. He analyzes some of the difficult issues confronting modern India in clear, straightforward prose and with remarkable insight, suggests answers, and welcomes discussion on them. This is the book for you: What Young India Wants.

Rather than a normal romance story, The Girl in Room 105 is Chetan Bhagat’s attempt to write something different. It is, as he indicated, an unlove story.

Zara Lone, a Kashmiri Muslim, is the girl in the room. She completed her Ph.D. while living in the IIT campus hostel. While the male protagonist, Keshav Rajpurohit, is a Rajasthani, he meets Zara in a debating tournament and falls in love with her. They broke up because of Keshav’s strict parents and the fact that they didn’t have a future together. Zara progressed and became engaged to Raghu. Keshav began teaching in a coaching facility after being unable to find work within the organization. Moving on seems impossible for him; he still misses Zara after four years. Overall, it’s a passable read. Pick this book if you’re stuck in a reading rut or want to enhance your English.

One Indian Girl by Chetan Bhagat is a divisive book. Reviewers fall into one of two camps: either they want to burn it or they mumble about a “publishing revolution” and a “new breed of readers” while gesticulating wildly at the sales figures. Chetan Bhagat did, in fact, once revolutionize the Indian (English) publishing sector by speaking for a generation’s hopes. This, however, is not that book. This book is being offered by a brand, and brands are purchased for a variety of reasons.

For the first-day first-show of a superstar’s film, tens of thousands of admirers will line. Is the movie worth seeing? Perhaps, but perhaps not. They’re there because it’s their superstar’s movie, not because it’s very terrific. Sales figures are meaningless when a book is given away for free in the first week of its release, as is the situation with Bhagat’s book.

Chetan Bhagat’s book “Making India Awesome” was published in 2015. It is a collection of his essays and columns that represent Bhagat’s thoughts and aspirations for India. For a reader like me who has only read his fictional works, he exposes the challenges that exist in contemporary India that prevent it from becoming ‘awesome,’ and it feels like a new wave of enthusiasm. This is a very reasonable point of view.

To be honest, the book did not pique my interest at first. But the material and the author’s strong beliefs immediately drew me in. We are reading into the author’s personality, a calm and composed Chetan Bhagat who uses his rationality and liberal mind, rather than simply reading the book. We witness the bravery of the man who is utilizing honest words and occasionally variables to present a full study of India as he emerges into subjects that are rarely mentioned.

All in all, if you’re a fan of following trends and like to stay updated with new authors, new  books and dozens of insights into the world of books, stay tuned to Booked for Books! Lots more coming in soon!

Share
Tags: 2 States: The Story Of My Marriage, Five Point Someone, Making India Awesome, One Indian Girl, The 3 Mistakes of My Life, The Girl in room 105, What Young India Wants