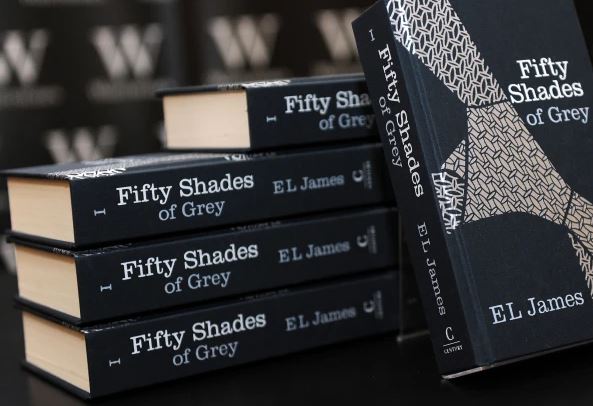 This book is a class apart for me. While it has got quite a few mixed reviews, the love and hatred for this novel is widely spread respectively. It’s a book meant for mature audiences. It is straightforward, unconventional and a little different from the usual romance novels out there.

When college student Anastasia Steele goes to interview young entrepreneur Christian Grey, she encounters someone who is handsome, brilliant and extremely intimidating. The unworldly Ana soon realises that she wants this man, and Grey admits he wants her too but on his own terms. When the couple embarks on a daring, passionately physical affair, Ana discovers Christian’s secrets and hidden fantasy.

Fantasy is an ambiguous idea, suggesting both an escape from reality and an interpretation of hidden desire. In culture, fantasy works like a mirror: It reflects who we are, and it also shapes what we become.

Fifty shaded casually associates sex with violence, but without any of this context. The story on the other hand is mundane in the most straightforward sense of the word. There are a lot of big ideas and provocative subject matter boundary-pushing craftsmanship attached to it. It’s just a conventional love story that happens to incorporate a lot of kinky sex. Though some have still dismissed the Fifty Shades books as an edgier version of the standard romance novel and the movie as very different from the average chick flick. The portrayal of BDSM is a   significant and nontrivial aspect of their popularity.

In some ways, that’s a profound thing for a mass-market book to do. But again, the couple’s sweet “vanilla” sex outside of the Red Room of Pain is portrayed as their most emotional, affectionate and cosiest interaction.

It’s worth noting that Fifty Shades is targeting a very mainstream set of women. It’s incredibly straight. Ana and Christian stick to the bottom and traditional versions of femininity and masculinity. If anything, the book throws a hint of light homophobia in which hugs between dudes and mild jokes about gay sex are used to diffuse tension.

It’s also a solidly rich class. Christian owns many luxury cars, gifts Ana a Mac laptop and a car. But had it been,

the portrayal of Grey’s character was that of a middle-class man, wouldn’t the public’s perception of this novel could have been far more negative? These are some questions I would like to put up out there!

People usually don’t pick up romance novels because they are full of multiple pages of mature, sophisticated dialogue about feelings of vulnerability and personal boundaries.

Fifty Shades eroticises sexual violence, but without any of the emotional maturity and communication required to make it safe.

Sexuality is something that has always been linked to a form of power. Its dynamics are rooted deep in it.  The new sexist power dynamics, instincts and preferences have still not been completely eradicated by people’s new understanding of equality. This book hasn’t really been very sufficient in all these matters. One thing is to explore power dynamics but it’s another to use power to manipulate and control your partner.

Largely, the conversation about sexuality in the liberal public domains and areas has become a conversation about individual rights and freedoms. The right not to be compelled to have sex without giving consent, the freedom to have sex in whatever way and with whichever partner you choose. There are many benefits to a rights and freedoms approach to sexuality, but there are also drawbacks.

Coming to the novel itself, a reader has to be open-minded before reading a book. In literature, one has to be extremely free and open about the ideas and text he or she is reading. The book may be considered immoral by many but the fact is that it’s a true sensation in the world of literature.

This article may serve as a guide to quite a few but one has to read and judge it by himself. Fifty shades may have had mixed reviews but it’s still an unequivocal novel that changed minded and modified perception.