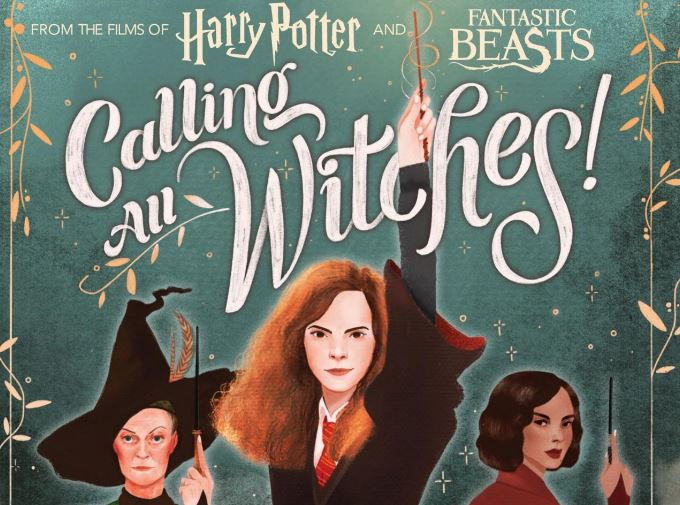 Are your kids…Nah.. are you a fan of stories with witches and wizards? We have come a long way from Harry Potter, the first story that evoked our interest in magic, witches, and wizards. For a Harry Potter fan, who is already brewing potions, casting spells, and vrooming the broomsticks, stories with witches and wizards brings a lot of joy. Even for someone, who isn’t still exposed to these magic tales, mysticism is something that doesn’t disappoint you. Jump into the costumes, get your snacks ready, and curl up on your sofa because the suggestions below are going to cast a literary spell on you. Get all comfy to get lost in the magical land:

For all the Hermione Granger, Leta Lestrange, and Minerva McGonagall’s fans, ‘Calling all witches’ is a literary feast. The book is packed with magical adventures these extraordinarily brave heroines from both Harry Potter and Fantastic Beasts This book is both a visual wonder and a literary marvel as it has beautiful and colourful illustrations of memorable movie scenes for every movie fan. In addition to the favourites of fantasy fans, Vinda Rosier and Bellatrix appear as female rule-breakers because of whom the wizarding world has taken the current shape. ‘Calling all witches’ is a fantastic experience for feminists, with all-female protagonists and antagonists. Experience the enriching magical world built by our own favourite childhood witches, while they are engrossed in adventures to save the wizarding world. Doesn’t it sound like wonder woman? Well, you have to read it to experience it.

2. A secret history of witches:

A secret history of witches authored by Louisa Morgan is an extraordinary historical saga of intergenerational inherited magical powers. The magical inheritance down five generations is both a ghastly dangerous and astonishingly beautiful gift. The women across generations fiercely defend and safeguard their magical gift, while the whole world is hostile to their ‘gifted’ inheritance. But, nothing hinders the determination of the witch family in defending their ‘gifted’ inheritance and safeguarding it while also protecting their tribe. Although the world spews poison on all their attempts, not until World War II do they realize that the inherited magic is the only way to save the world from destruction. “A secret history of witches” is a periodic marvel and you find all that you yearn for in a fantasy genre. If magic, adventure, and history don’t excite you, I wonder what does.

Why should it always be witches and wizards saving the world? Why can’t a story narrate their viewpoints instead? James Patterson, the master of the suspense genre, probably thought the same and came up with “Witch and Wizard” The five-book series is narrated from the point of view of two siblings, Whit and Whisky, who go missing and face allegations of practising black magic. What happens to them? Are they kidnapped? Or did the dystopian society, which they were formerly a part of, did something to them? Well, that’s all for you to read and explore. No spoilers here! But, I can assure you one thing: a book series that is binge-worthy as you encounter the struggles of two siblings as they attempt to escape and survive.

4. Initiated: Memoir of a witch:

We know witches and wizards only in a fictional world. But, have you ever felt the urge to know more about them, if ever they existed in reality? Well, as a fantasy fan, I have always been enthusiastic about witches, vampires, werewolves, and wizards. If you can feel me, ‘Initiated’ is for you. The Amanda Yates Garcia authored novel reflects on the inner struggle of a witch, who doesn’t know she is one, discovering her inner witch. The answers to all your questions ‘What is it to be a witch?’ ‘Is it possible to lead a normal life?’ and ‘How do they integrate with the world?’ are all revealed in this book.

Initiation is more than a witch’s self-discovery. Although Amanda learnt witchcraft when she was 13, she doesn’t embark on her witch journey until she finally decides to live in peace with her body, spirit, and nature. After reeling under the pain of patriarchy, her exploration of the magical world begins. Initiated is a brilliant work of magic and feminism coupled with self-discovery that one must experience at least once in a lifetime.

Good Omens has rightfully been considered a modern classic in fantasy It is a sapid potion of fun, magic, suspense, and horror fiction that can intrigue different age groups and interests. Humour is something that I have never thought of in horror fiction. Well, why not have some, when it is served on your plate?

By the way, what views do you hold on the apocalypse? Well, both in the literary and entertainment world, it has been a dominant theme numerous times. But, never did it bore the audience and readers. Apocalypse is always an interesting topic to see, talk about, and read about. Good Omens revolves around this theme.

Our protagonists, Aziraphale and Crowley, a funny angel and a fussy demon, somehow liked the mortal’s lifestyle. But, they didn’t want the world to end abruptly. After all, who would want to miss the mortal lifestyle? Thus, the angel and demon pull their socks up to save the world and save it from destruction. Do they succeed in giving the world a happily-ever-after ending? To know that, you should start reading the book. The 491-page book is nowhere boring with the humour, suspense, and magic spread across all the pages.

Witches and wizards are eternal beauties. No matter how much of a science buff you are, one or the other character or magical tale must have grabbed your attention. Now, these books are over to you. If you have read any of them, share your thoughts below. Else, what are you still waiting for? Just start vrooming your broomstick to the magical world of witches and wizards.

Share
Tags: A secret history of witches, Calling all witches, Good Omens, Initiated: Memoir of a witch, Witch and Wizard